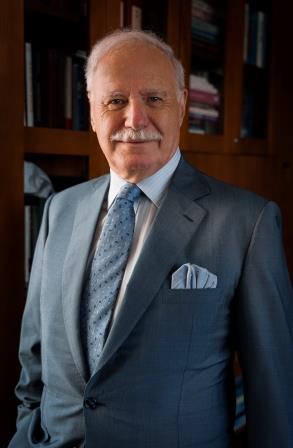 Born in Athens Leonidas Phoebus Koskos studied law, economics and political science at the University of Athens Law School and subsequently at the Law School of the Ludwig Maximilian University of Munich, where he was a scholarship recipient of the German Academic Exchange Service (DAAD).

A member of the Athens Bar Association, he continues to practice law, with a particular focus on corporate, labor, association and copyright law. He was Assistant to the Chair for the Philosophy of Law and the Introduction to the Science of Law at the University of Athens Law School.

Mr. Koskos served as President, Executive Vice-President and Managing Director of several large Greek industrial companies, where he introduced modern management principles, and designed and led the transition from an owner-based enterprise to a professionally managed firm. Moreover, he designed and implemented a plan for the restructuring and recovery of two ailing industrial companies.

Mr. Koskos was actively involved in a number of industry and employer associations that aim to highlight the role of private initiative and the difficulties it faces in Greece. He was a member of the Board of Directors of the Federation of Greek Industries (SEV), co-founder and President of the Federation of Greek Food Industries (SEVT), and co-founder, Secretary General and President of the National Council for Private Initiative.

He was equally active in similar European organizations, serving as Vice-President and then as an elected President of CIAA (Confédération des Industries Agro-Alimentaires de l'Union Européenne), which represents the interests of more than 500,000 European businesses. He also was as a member of the Committee of the European Social Fund.

Mr. Koskos also served as President and Governor of the National Welfare Organization, an organization focusing on less privileged social groups in Greece. In his capacity as Executive Director of the Hellenic American Union, he revitalized the organization and repositioned it at the forefront of Greece’s cultural and educational life. As chief executive officer of these state and private public-benefit organizations, Mr. Koskos developed a broad range of cultural and educational programs and initiatives.

Continuing his leadership role in education, he was appointed Executive Vice President of Hellenic American University in 2004 and became its President in 2012, a position he continues to hold.

Mr. Koskos has been a steadfast advocate of economic and political reform. In numerous articles and interviews in print and digital media, lectures and participation in public debates, especially during the years 1976-1989, he has supported the need to keep public debt at low levels, to abolish state monopolies, to protect consumers and in general to implement European Union rules and directives in the country.

Mr. Koskos is an Eisenhower Fellow (1985) and the recipient of the Chevalier dans l’ Ordre des Palmes Académiques. 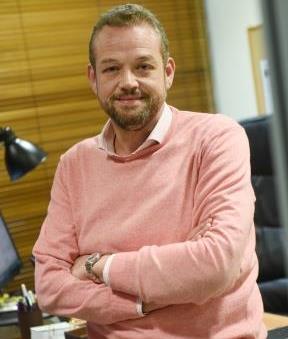 Leonidas Tzonis is Executive Vice President and Chief Financial Officer of Hellenic American University. Dr. Tzonis holds a Ph.D. from the Newcastle Business School, UK, an M.Sc. in Finance and Investment, a PG Certificate in Higher Education from the University of Durham, and a B.Sc. in Economics and Business Finance from Brunel University. He was a full-time member of the Business School Faculty at Durham University, a visiting lecturer at the Singapore Institute of Management, and a distance learning tutor for SOAS (University of London). He served as Professor of Business at Hellenic American University before assuming duties as Executive Vice President. As a consultant he works with firms in Greece, Northern Africa and Central Asia. He is a founding member and sits on the Board of Directors of International Educational Consulting Ltd and was co-founder and vice-president of the International University of Libya, the first English-speaking fully accredited higher education institution in the country.

Themis Kaniklidou is Provost and Chief Academic Officer at Hellenic American University. She is also Associate Professor in Translation and Communication and Associate Director of the Ph.D. program at Hellenic American University. She completed her Ph.D. (Language and Communication) working on Media Discourse and Translation at the University of Athens where she wrote her thesis on Narrative Theory and News Translation. She also holds an M.A. in Specialized Translation from the University of Surrey (2004) and a B.A. in Translation (2002) from the Ionian University of Foreign Languages – Department of Translation and Interpreting. Themis has been involved in various projects that link academia with the translation industry and EU institutions, such as OPTIMALE, an EU-funded program on Optimizing Professional Translator Training in a Multilingual Europe. Themis is an active member of EURASHE where she is a member of the employability and life-long learning and research and innovation working groups. She has organized international conferences and has participated in panel discussions as a discussant. Since 2008, Themis has been teaching graduate and undergraduate courses in Translation Studies, Terminology, EU Translation, and Language and Communication, Greek culture and ethics and western culture. She has been visiting scholar at the communications department at Rollins College, USA and a part-time lecturer at the University of North Carolina at Charlotte. She has supervised M.A. dissertations and has been mentoring graduate and Ph.D. students. Themis has published her work in peer-reviewed journals and has written chapters for edited textbooks. She has refereed articles for Rodopi and TEXT and TALK. She has presented her work in international conferences and has given plenary talks.